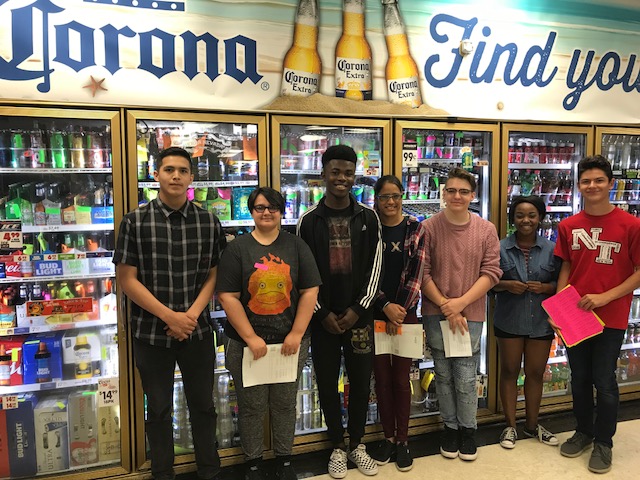 In the fall of 2017, Anderson New Tech High School’s Friday Night Live decided to focus their efforts for the school year on an underage drinking project. The project included research around underage drinking, school-wide events, and a “Sticker Shock” campaign. The event was sponsored by the Shasta County Chemical People, Inc. Partial funding was provided by a grant from the Friday Night Live Partnership and the California Office of Traffic Safety, through the National Highway Traffic Safety Administration.
The youth first went to six stores near their school where they knew their classmates frequented and did a “Store Assessment.” In the assessment they looked at where alcohol was place in relationship to non-alcoholic and kids items, advertising in and outside of the store, signage about not supplying alcohol to those under 21 along with several other criteria. Students assessed the stores and then shared their findings with the store managers. From this information they then decided which store would be the best to do the “Sticker Shock” Project at. Students decided to partner with Speedwaay which is located directly across the street from their school.

After receiving permission and partnership from the store manager the youth took brightly colored stickers and placed them on cartons or cases of cans of alcohol. City Council members Barron Browning and Melissa Hunt along with Police Chief Michael Johnson and Lieutenant Rocky Harpham partnered with the youth in placing the stickers and showing their support of the youth’s efforts. The stickers contained information gleaned by the students through their data collection, analysis, and research. The intent was to provide the adult community with reminders not to provide alcohol to minors.

Thank you to Speedwaay, Barron Browning, Melissa Hunt, Chief Johnson, and Lieutenant Harpham for your support in making this project happen!